Before signing his record-setting contract with the Phils, Bryce was busy scoring endorsement deals with T-Mobile, New Era, Gatorade, and others. He’s not one to be content with RBIs and MVPs. To the contrary, he’s been called an ad-making machine and that has pushed his name recognition through the roof. Now, they’ll have to create a new wave of ads with him in a Phillies uniform.

Loyalty is worth whatever the going price may be.

Marketing 101 says it costs less to keep a customer than it does to pursue a new one. Apparently, the Nationals need some marketing majors in their office. The Phils had no problem paying for a little loyalty and neither did Under Armor when they locked him in for a 10-year endorsement deal in 2016 (the largest ever for an MLB player at the time). After the boost in ticket sales, merch, television, and endorsement deals, their $330 million investment in loyalty should have a major payback.

You better live up to your hype. 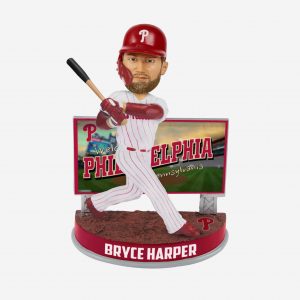 Ever since appearing on the cover of Sports Illustrated at 16 years of age, Bryce has been living this lesson. Even though he’s proven his worth time and time again, he remains a figure that some people love to hate. We’re excited to have him and hope he’s feeling some brotherly love from his new home — welcome to Philly, Bryce!